Way back when, a little after when Chip moved up here with me, we formed a business – Hawk Studio – which was a business which could incorporate his leatherwork, his woodwork, and whatever other area that he found himself drawn to.  Hawk Studio even had a really cool store at one point – but that closed when other friends bought the building and needed the space for their store.  At the time we planned to focus on getting our house staged and sold and to move onto a property with more land to hold our growing family (the boys had already arrived) but for various reasons associated with the drop in the housing market and the joys of owning a house that is 135 years old, we are still working on achieving that particular goal.

Now that we finally feel like we are a little more grounded in this parenting thing, Hawk Studio is starting to function again.  As I posted, last weekend was its coming out party in our community at our Community Day.  Production is starting on new inventory which I will be posting about in the near future (since I just dropped on Chip yesterday that I decided to blog about his business on Thursdays – not alot of lead time, I’ll admit).  So today I thought I would show you a couple of things that were already finished.

The first was my first Valentine’s Day present from Chip.  We have this great deal with Valentine’s Day.  I get a new piece of leatherwork or woodwork and he gets a power tool.  I think I am waaaaaaay ahead on this one.  So since I am a lawyer by trade, Chip made me a briefcase that would hold my laptop.  Here it is:

Now this is really cool on a number of levels.  First – there is no metal in this bag. It is all leather.  Second – it is all handstitched.  No machine work here.  Third, that is a deer antler point as a closure.  He finds deer antler sheds in the spring and then cuts them into buttons and closures for his bags and pouches.  Fourth, both the handle and the strap incorporate mystery braids.

The mystery is how did he braid five strands of leather where the end of each braid is a solid piece of leather? Yeah – he’s that good.

He also gave me pockets to hold pens, my mouse and extra cords. 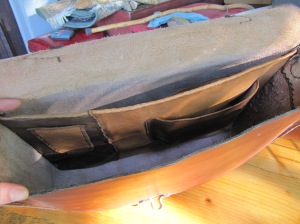 He put the divider in so I could keep the power cord separate from the laptop. I also have some foam that I put in when I am transporting the laptop in this bag. I love my briefcase. Its a show stopper wherever I go.

It’s not for sale.

On the woodworking end, here is one of Chip’s slab top tables.

Chip likes the slab tops because it enables him to work with a more traditional joining method where the ends of the branches are carved down to fit into holes made in the larger wood.

This should allow for the pieces to hold together without nails or glue – everything pounds into place.

Yeah, this is cool too.

Then, just because it was handy, here is a picture of one of the canes/walking sticks Chip made. I love the color, the feel, the look of this piece.

So that is my official introduction to the Thursday Hawk Studio blog day. I can’t wait to show you what he is working on now next Thursday. Make sure to check in.

I am a Mother, a daughter, a sister, a wife, an attorney, a crafter and the granddaughter of an amazing woman - my Polish Grandmother. My Grandmother gave me so much, through her love and her patience, her sayings and her time teaching me how to craft and to give to others, that it seemed fitting to share some of that wisdom, to tell some of her story, and to chat about life and crafts in a way that would be a testament to what she gave me.
View all posts by Shelly R. →
This entry was posted in Chip, Hawk Studio and tagged briefcase, Chip Rosien, Hawk Studio, leatherwork, tables, woodwork. Bookmark the permalink.