“This is my favorite soup of all time.”

Not something I expected to hear from Christopher after I had just given him a bowl of tomato soup – but that is really what he said.  Wow.

This soup ended up tasting really good, even though I fudged the recipe a bit.

First, I could not find all of the ingredients.

Here is where I made substitutions.  First, while I usually find lemongrass in the spring, in the heat of summer it could not be found in my plethora of grocery store and health food options.  I substituted celery as I thought the saltiness of the celery would bring out a little more flavor in the soup.  I could not find Fresno or Thai chilis either.  As both Fresno suggests southwestern to me and southwestern and Thai cooking to me are milder forms of spicing than some other cuisines, I substituted a hungarian chili pepper.  (Note that I have no idea what a Fresno or Thai chili tastes like so this was all a stretch of the imagination – Gordon Ramsey would crucify me for this method of modifying a recipe.)  I wanted to give the soup some warmth without making it spicy.  I am feeding kids after all.  I did not find pea tendrils but they were only included as garnish so I let that one go.

We combined the soup with grilled ham and cheese (with optional tomato slice) sandwiches to make a complete dinner.  We started off with gathering our ingredients. 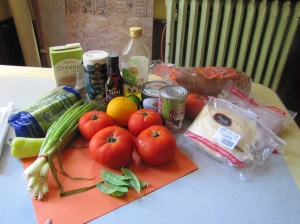 Most of the soup ingredients were organic as I hit the Farm Store first when shopping.  The tomatoes were locally grown which also added to the flavor – less time between plant to table and they were organic.  They ripened to a deep juicy red on my office air conditioner during the week. 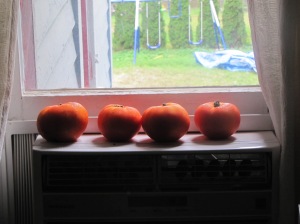 After gathering the ingredients it is time to rally the troops.  Luckily for me that does not take much.  I just let them know we are cooking and I am overwhelmed with voices asking “what can I do”.  So Markus minced the hungarian pepper . . . 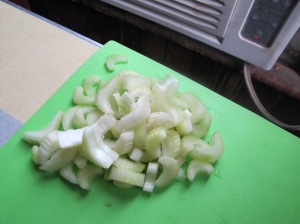 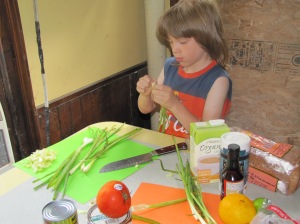 and Jesse chopped the tomatoes. 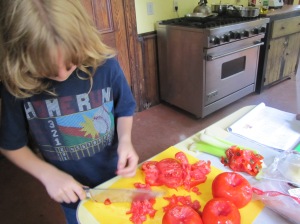 Then we sauteed the scallions, celery and pepper in olive oil.

They cooked about 5 minutes and then we added the chopped tomatoes and cooked it another 5 minutes.  In the meantime, Markus juiced (on the type of juicer Gram always used) the orange and the lime as we needed fresh orange and lime juice for the recipe.

While it was boiling down, we put together the grilled cheese sandwiches. 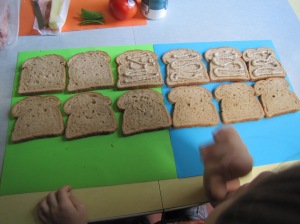 We had to keep track of whose was whose as only four people wanted mustard.  Chris, Jesse and Markus did not want tomato and Chip and I wanted everything.  Then we put them all together and started buttering the bread.

At this point, Chip took over the grilled cheese sandwiches and I took the reduced and slightly cooler soup (I turned off the soup after about 15 minutes of boiling) and pureed it in the blender.  (Yay new blender).  This made it really handy to just pour the soup into six bowls, add the crab meat and my little snow pea garnish and voila

I did not expect to like this.  Neither Jesse nor I like tomato soup.  We both finished our bowls completely – as did everyone else.  The vegetables gave the tomatoes some flavor and the coconut milk seemed to add some body to the soup and smooth the acidity of the tomatoes and the citrus fruits.  It was a nice blend of flavors so that you were not hit with a strong tomato flavor.  The crab also gave texture to each bite.  Really good and could easily be served to company as it looks elegant too.

Also, this does not really take that long to make.  There are not alot of vegetables to cut up and ripe tomatoes chop quickly and easily.  Plus, since the entire soup is pureed, it is not important to get the vegetables looking great when cutting.  There is plenty of time while the tomatoes are cooking to make sandwiches or what ever else you are making to accompany it.  Lump crab meat comes pre-cooked so that part is simple too.

So on to next week.  The oven is still not fixed.  While cleaning it Chip discovered that a huge hole had burned through one of the metal plates in the bottom of the oven and is heading to Ackerman’s today to find out if it can be replaced.  Sigh.  So we are still working on stove-top this week.

No, its not the cover recipe – though the boys would lobby for that.  It is another of their Fast, Easy and Fresh meals – Grilled Chicken and Plaintains, Jamaican Style 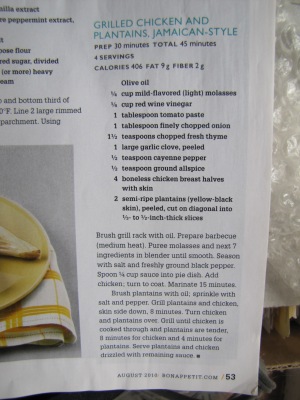 The spices are not burn up your mouth spices, since I am cooking for kids, and the addition of the plaintains will make it more of a treat.  Chip will do the grilling and the boys and I will prepare everything.  I think it should work out well.  So far we are two for two on these recipes – here is hoping we can make it three for three.  Let me know if you try any of these recipes – and consider subscribing to Bon Appetit.  It is worth the little bit of organizational time it takes to do this for the look of happy contentment on Chip’s face during dinner.  Bon Appetit just seems to consistently have great recipes we would not have thought of otherwise.

Enjoy your weekend.  I will post again on Monday with the project report.  I think two more projects will be back in their baskets by then and two other projects will be up for knitting.  Woo Hoo.

I am a Mother, a daughter, a sister, a wife, an attorney, a crafter and the granddaughter of an amazing woman - my Polish Grandmother. My Grandmother gave me so much, through her love and her patience, her sayings and her time teaching me how to craft and to give to others, that it seemed fitting to share some of that wisdom, to tell some of her story, and to chat about life and crafts in a way that would be a testament to what she gave me.
View all posts by Shelly R. →
This entry was posted in cooking, Family, recipes and tagged Bon Appetit magazine, cooking with kids, Family, kids, recipes, Tomato Crab Soup. Bookmark the permalink.