I have nothing to show you today that Chip made – because he was very busy with his developing apprentices – who were learning how to make belts.

The cousins had been working on their new belts most of the week, late at night, up in the loft workshop with Chip, but Chip only brought the camera up with them today so the photos I have are at the end of this great creation process.

We catch up with our young apprentices after the belts have already been cut, measured, holes punched and hardware decided.  Here is Markus, edging his belt.

They had to attach their buckles – as demonstrated by Davey. 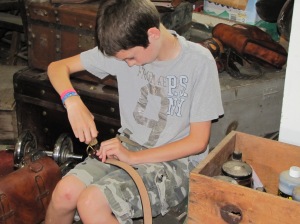 Jacob’s buckle required a keeper – which is the term for the little loops on the belt.  So he had a little extra work to do. 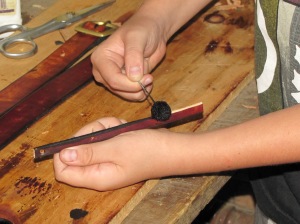 Do you have any idea how long Chip has been waiting for his nephews to be old enough to work in his leather shop with him?  He had these plans brewing as soon as Jacob was born!!

When the were done, they all wiped their belts down.

They learned alot about using different leatherworking tools and used all of the below in making their belts.

And here is this week’s Hawk Studio finished projects!

I am a Mother, a daughter, a sister, a wife, an attorney, a crafter and the granddaughter of an amazing woman - my Polish Grandmother. My Grandmother gave me so much, through her love and her patience, her sayings and her time teaching me how to craft and to give to others, that it seemed fitting to share some of that wisdom, to tell some of her story, and to chat about life and crafts in a way that would be a testament to what she gave me.
View all posts by Shelly R. →
This entry was posted in Chip, Family, Hawk Studio and tagged Chip Rosien, Family, Hawk Studio, kids, leather belts, leatherwork. Bookmark the permalink.