These are just some photos of us taken this year at Faire in some of our garb.

These are me in my scottish garb (though the top drape in the back is not right – it should have been twisted tighter and up on my shoulders more – but I could not see it from the back until after the pictures were taken.  Also the center pleating had started to pull out – probably from sitting in the car in my garb.  (There really is no place in a parking lot to put on a plaid.)

That is 6 yards of material laid out, pleated on top of my belt, which I then lie down on and then wrap the belt around me to secure everything.  The top corners are then twisted and attached to the front with two penaculars I have that were made by a blacksmith friend – Greg.

My friend Dale made the overskirt and the plaid skirt for me.  The chemise was made by our friend Suzanne.  It is a traditional scottish Leine.  The sleeves were used by women to carry their daily necessities when they left their house.

They are very handy for carrying my wallet and the program (and Chip’s mead pouch) when at fair.

Chip made the belt.  We have matching ones with oakleaf patterns and wrought iron buckles Greg made – they are our engagement belts.

Chip wore one of his few vests he did not make this past weekend.  This one was made by Potomac and purchased before he was doing much work in soft leather.

He is wearing a green linen shirt that Suzanne also made.  That’s his mead pouch in his hand.  That is probably from Bulls Eye though that is a guess.

Here are the boys in their garb from last week 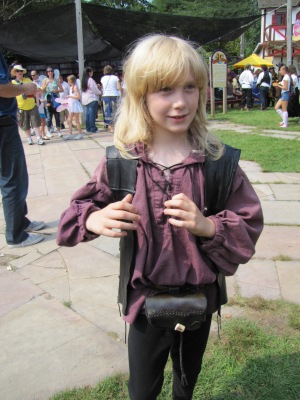 Vash was a little dizzy.  They had just done a barrel ride where you spin in circles as it goes up and down a high pole.

I know I posted this before of the boys and Chip but it fits in this post so I am posting again the picture of the boys, Chip and our nephews, Jacob and Davey. 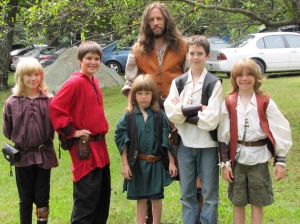 Chip was wearing his horseman’s surcoat that he made for our wedding with another linen shirt Suzanne made – this shirt matches my leine. 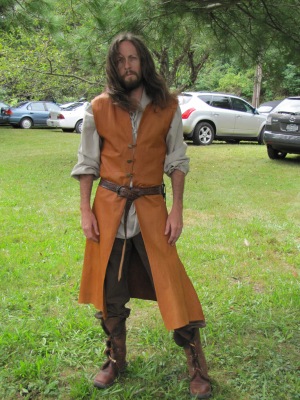 When we go to Faire the boys love the games of skill.  Here they are getting ready to throw bean bags at a swinging target. 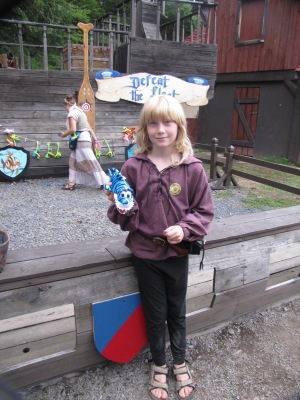 I think that their favorite thing at Faire was the fruit ices – which seemed to go up in price every week.

This time was strawberry, peach and pineapple.  These really helped on some of those hot August Faire days.

That’s all I got this time.  We actually did not take alot of pictures this year.  It is harder to concentrate on those things when trying to keep up with Chip and the boys in the middle of a festival day in the Renaissance.

Hope your weekend was good.

I am a Mother, a daughter, a sister, a wife, an attorney, a crafter and the granddaughter of an amazing woman - my Polish Grandmother. My Grandmother gave me so much, through her love and her patience, her sayings and her time teaching me how to craft and to give to others, that it seemed fitting to share some of that wisdom, to tell some of her story, and to chat about life and crafts in a way that would be a testament to what she gave me.
View all posts by Shelly R. →
This entry was posted in Chip, Family, Uncategorized and tagged Chip Rosien, Family, Garb, kids, New York Renaissance Festival, Renaissance Faire. Bookmark the permalink.