Monday Project Report – Finally finished with Halloween and other stuff

Lets start with the other stuff.

I bought what I hope is my last stash purchase of yarn this week.  I say this because I have SOOOOOOO much yarn right now and I am focusing on learning how to spin my own now – but I had to buy this.

Its Madelinetosh tosh merino light in Tart (the red) and Ink.  Loved the colors and of course, I love Madelinetosh.  I had asked Lorraine to make sure she ordered more Tart in her next order for me (I had given mine to my sister) and the order came in this week so I had to get some – and the Ink was just that deep denimy blue I love so that came home too.  But that’s it!  No more yarn buying.  I need to learn to spin it myself.

I also sewed the frog closure onto my niece’s Polkadot Jacket and it helped.  At least it stays on now.  Here is Vash – who is the same size as Kathryn – modeling the finished jacket.

I am also almost finished with Cindy’s scarf too.  It would have been completely finished but I can’t find my T-pins to block the fool thing – so that will have to wait until I either find my T-pins or I get to the fabric store and buy more.  Sigh.  Here are some shots of the unblocked scarf to give you an idea of how it came out. 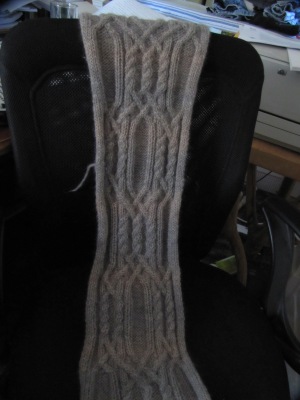 The name of the pattern is Sinead and it is another free pattern from Berroco.  I have to say that I was again disappointed by their pattern.  There were 4 errors in the pattern which I would not have caught but for the fine folks on Ravelry who had already tried to make this pattern and posted that there were errors.  In order to complete the scarf I had to chart out the entire written pattern to discover the errors in rows 55 and 59 of a 62 row pattern.  Sigh.  I really think that I will have to think long and hard before I use another one of their patterns.  I went with this one because I loved the cable pattern, but to put in so much work to fix their errors with every project is just not worth it.

The yarn was Cascade’s Eco Duo which I just love.  Cindy asked for a scarf for Christmas in Eco Duo.  She did not care which color.  I chose the grey/beige blend as I thought it would be more versatile.  Eco Duo has a striping effect when knit so there are gentle stripes throught the scarf.

I was not thrilled with Berroco’s directions to add a sideways ribbing along the sides of the scarf so I just added a stockinette edging.  Not surprisingly, it rolled – which is why I have to block it.  With hindsight, I should have done a 2 x 2 ribbing on the ends and a garter stitch along the sides while knitting this to avoid the need for blocking.  But once it is blocked, I think it will look great.

I finished the mitts for the Storm Costume and sewed the velcro on where we had tried to use the sticky stuff.  I had to throw out the needle afterwards because the adhesive got all over it and made it useless after this.  No pictures of those changes to the Storm costume because it doesn’t really look any different than before.

Harry’s costume is actually pretty easy as Markus chose the regular school uniform and not the quidditch uniform this year.  Harry wears black shoes, grey pants, a white shirt, a grey sweater, a tie in Gryffindor colors and a house cloak.  All I needed to make was the house cloak.

I started with this as a base pattern. 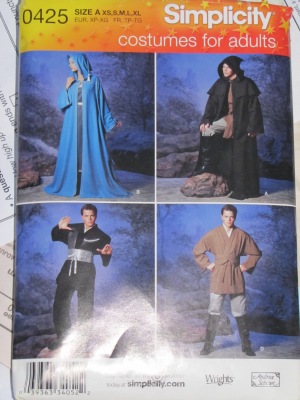 We basically worked with the blue cloak pattern as it was closest to the house cloak – having a hood and sleeves.  The pattern is one size and then I suppose you are to cut it down to the size you need, though that is not stated anywhere in the pattern.  Adjusting the pattern was the hard part as it was basically sized for X-Large and Markus is not an adult X-Large.  It also is yoked – and I wanted a solid front piece as the pictures of the house cloak are not yoked.  There was alot of pinning and adjusting to do so that the hood and sleeves still fit onto the shorter, narrower body – and that was all before I cut.  I also added a lining for the hood.

I made this cloak out of black and maroon felt – reciting my inner mantra “Its just a costume – its just a costume . . . .”.  I have a tendency to put too much time and money and energy into our costuming (see the Storm costume) and I tried to reign myself in a little on this.  I did, after all, have to special order the tie, the Gryffindor patch, the glasses and the lightning bolt tattoos.  It photographs a little shinier and slicker than it appears in reality.  After learning how to spin I think a photography class might be in order.  Sigh.

On the plus side, because it was felt, no seams were needed on the bottom or the sleeves – just cut.

You may notice that I am not showing you the entire costume.  That is because Markus hurt his knee sometime during football practice on Thursday night.  As is his way, he did not really make a big deal of it so we thought it was just growing pains again.  By Saturday morning, his knee was really swollen so Chip brought him to the doctor’s – who sent him right to the hospital for X-rays and a script to get an MRI today!!  When he woke up on Sunday the swelling was down to his toes!!!  So he spent the day on the chaise in his PJs with his leg elevated and iced.  He could not really walk or stand so his modeling time was limited to a quick “stand on one foot for a minute so I can get these pictures of the cloak” thing.  I will post the full costume with the Halloween pictures. 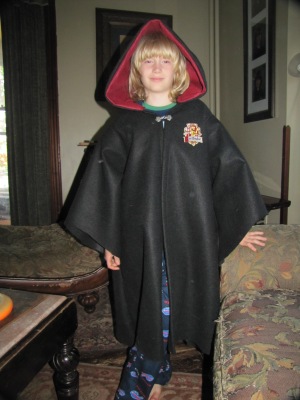 We tried to cut down a wig to give him brown hair, but it just was not going to happen using a nylon cheapo wig and I am NOT dying his hair – so we may have to go with a blonde Harry Potter unless I can come up with another idea.  (Yarn?)

So that is my project report for this week.  I’m back to working on sweaters after this but who knows – maybe something will get done for next week.  Have a great day.

I am a Mother, a daughter, a sister, a wife, an attorney, a crafter and the granddaughter of an amazing woman - my Polish Grandmother. My Grandmother gave me so much, through her love and her patience, her sayings and her time teaching me how to craft and to give to others, that it seemed fitting to share some of that wisdom, to tell some of her story, and to chat about life and crafts in a way that would be a testament to what she gave me.
View all posts by Shelly R. →
This entry was posted in Family, holidays, knitting, sewing projects, yarn and tagged berroco, cloak, costume, halloween, harrypotter, polkadot, potter, scarf, sinead, yarn. Bookmark the permalink.