I’m Dreaming of a White Halloween?

Yeah – I know its blurry.  Chip was shivering when he took the shot.

For once, Chip’s procrastination with getting the Halloween decorations up has paid off – as our bats and ghosts and other flying things just were not made to hold up well under snow.

I have to admit I am rather concerned about all of this.  I spent alot of time on those costumes and it now looks like no one will see them but us.  😦

The first showing of the costumes was supposed to be at church tomorrow morning – when Father Gary leads all of the kids in costume through the church so that all of the parishoners can enjoy the fun with the kids.  Church school is usually a party too.  Now I don’t know if we will even be able to get there tomorrow, much less in costume.

They are saying anywhere from 6″ to 12″ of snow for our area.  They are also warning of massive power outages.  That could mean no school on Monday – which would kill the school parade in costume too.

Nor are these costumes really built for walking through snow in boots – especially our “Storm”.  I am feeling a little grumpy about the whole thing.

The boys aren’t even thinking about it. 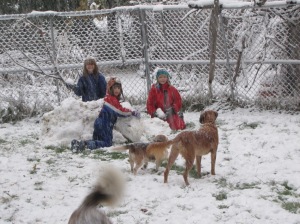 They have been out there for the past hour working on what will be our artic Halloween decoration alternative.

This one was made by Vash when we had a shorter snowfall earlier in the week.  He was desperate this morning to keep him “alive”.  Needless to say, his little snow goon is doing fine at the moment.

The boys plan to make a series of them tomorrow to line the walkway, then they will cover them with cheesecloth to make them spookier.  Markus is considering building a snow werewolf.

In the meantime I just popped an apple pie into the oven so it would be done before we lost power.  I can always draft roving by candlelight.

I’ll let you know how this all works out.  What a life!

I am a Mother, a daughter, a sister, a wife, an attorney, a crafter and the granddaughter of an amazing woman - my Polish Grandmother. My Grandmother gave me so much, through her love and her patience, her sayings and her time teaching me how to craft and to give to others, that it seemed fitting to share some of that wisdom, to tell some of her story, and to chat about life and crafts in a way that would be a testament to what she gave me.
View all posts by Shelly R. →
This entry was posted in Family, holidays, Uncategorized and tagged Family, goons, halloween, holidays, nor'easter, snow, snow goons. Bookmark the permalink.

1 Response to I’m Dreaming of a White Halloween?