It started with smoke

Chip was working in the livingroom on a leather briefcase when he heard the fire engines pull into the driveway we partially share with our neighbors – Chris and Jean.

Chip did not know it, but the folks that Jean had hired to work on their house – putting on a new roof and refurbishing their front porch, had smelled smoke while they were working this morning and then discovered the smoke coming out from under an eave in a corner of the house above the front porch.  Jean called 911 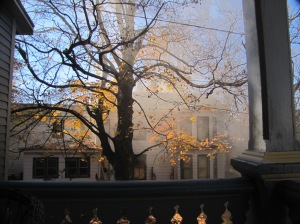 After the smoke, came fire. 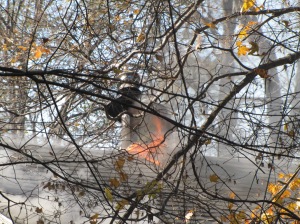 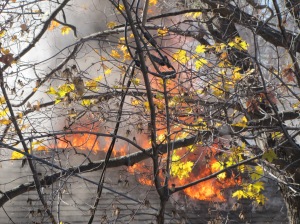 And with the fire came more firefighters

In all, 9 fire companies responded to this fire, with a tenth on stand-by if they were needed. 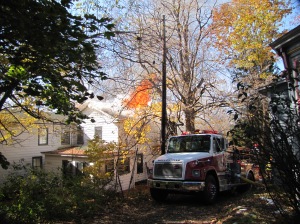 We paid alot of attention because the flames were very close to trees that hung over both of our homes – and if the flames lit the trees, it would have carried over to our roof.

And then the center of the roof was gone. 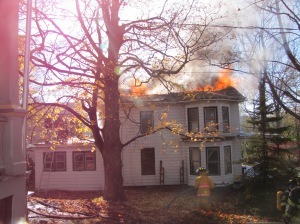 I stood on the other side of the house with Jean.  The view from there was kinder.  You could look into the kitchen and still see the magnets on the refrigerator.  The very back extension looked unscathed.

The side facing my house took a much bigger hit. 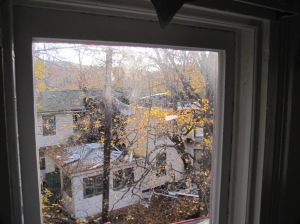 But the front was the part that shocked me the most. 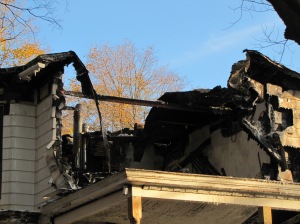 That was their master bedroom.

The part of the house that burned was 150 years old.

Chris was unaware any of this was happening.  He was working in the City and would not get the message until at least an hour after the firefighters left.  The fire captain’s association gave her a voucher for $75 to get whatever she needed right away.  Another friend was gathering a bag of toiletries for her and some clothing too as all of their clothes were gone.  She was most concerned about whether the firefighters had trampled her plantings of Ginseng and other Chinese medicinal herbs she had planted around the outside of the house.  She had enough time to get her computers that held her business information on them out of the house.

Thank you.  To the powers that be for keeping my home and family safe.  Please look over Jean and Chris as they try to come to terms with how, in a few short hours, their entire life was changed and their priorities re-organized.

I bought my house 12 years ago today.  I often feel guilty that I get to spend my life so blessed, so privileged – to have a roof over our heads and food on the table and my children and husband here with me.  Tonight I will give thanks again for all we have, because it could all be lost – so fast.

Thank heavens someone saw that little bit of smoke.

I am a Mother, a daughter, a sister, a wife, an attorney, a crafter and the granddaughter of an amazing woman - my Polish Grandmother. My Grandmother gave me so much, through her love and her patience, her sayings and her time teaching me how to craft and to give to others, that it seemed fitting to share some of that wisdom, to tell some of her story, and to chat about life and crafts in a way that would be a testament to what she gave me.
View all posts by Shelly R. →
This entry was posted in Family, Home, Uncategorized and tagged fire, home. Bookmark the permalink.

2 Responses to It started with smoke