With the weather turning colder, warm comfort foods start to come more and more into the family’s meal plans.  One of my favorites growing up was Gram’s Chicken, Biscuits and Gravy, though I must admit I have never been able to replicate it to the level my Grandmother did.  There was something about her gravy, she just knew how to make it perfect, and seemingly effortlessly, and if I ever figure out the trick I will let you know.

In the meantime, here is her recipe, as included in our Family Cookbook by my Mom.

The recipe begins by boiling a cut-up chicken in a big pot of water, seasoned with salt and garlic powder, for 2 hours.  I try to get the “natural” chicken at our local grocery store, but they did not carry a complete cut up “natural” chicken so I bought a package of chicken drumsticks, chicken thighs and split chicken breasts. . .

and into the water they went. 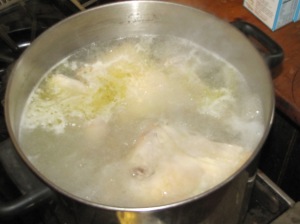 I let everything boil for about an hour and then put together a cornbread casserole (look in my cooking with kids category – we made this a few weeks ago if you want the recipe) and cut up some cauliflower for steaming.  Markus is not a lover of cauliflower but I knew he could dip it in the gravy which would make it more palatable for him.  He finds it rather bland.

When the chicken was done boiling, we pulled it out and set it aside to start pulling the meat off the bones. 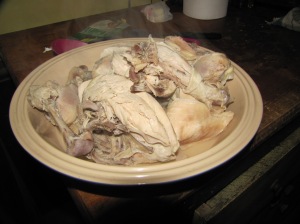 Now is where things get busy and extra hands are – well – handy.

I had to strain the chicken broth into another pot to make the gravy.

You do this because little bones and chicken parts will fall off into the water that you don’t want in your gravy.  Then you mix your flour and water – we do it in a plastic container so that Jesse can mix it by shaking it well without making a mess. 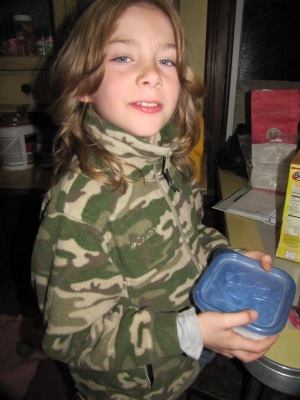 I use at least a cup of flour for a pot of broth – but it still did not make it very thick this time.  This is unfortunately a trial and error type of thing because Gram just eyeballed it and it depends on how much gravy you are trying to make.  We make alot because there are six of us.  Gram would cook for 2 or 3 so it might be that I need to make further adjustments due to the quantity of gravy I am making.  I am thinking of adding some cornstarch the next time to see if it works better.  Using the flour and water I got a thin gravy – but that is still okay in this recipe.

Keeping your stock just below a boil, start whisking in your flour and water mix by streaming it in slowly.

After the flour was in I increased the heat to start boiling down the gravy to thicken it.

Chip, in the meantime, was pulling the chicken meat off of the bones and frying it up a little in butter. 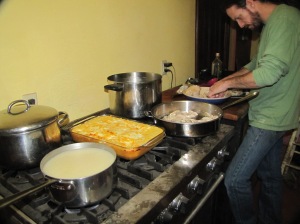 Now that the cornbread casserole was done (you need to sit it for 10 minutes before cutting it) the biscuits could go in.  Gram always made the biscuits on the side of the box of Bisquick.  She would roll out the dough and cut them into circles and then bake them.  Mom would make the drop biscuits.  Normally we roll them out like Gram did for this, but this time my timing was a little off (that happens when I am thinking of taking pictures and what I will use for the blog) and Vash made the drop biscuits instead.

We patted them down a bit to look a little more like circles.

Biscuits are soooo easy.  Bisquick and milk.  Mix in a bowl with a fork and then drop onto a cookie sheet and bake for about 10 minutes.  They were baking while we were putting everything else on the table.

You cut your biscuits in half and put them right in the pot of gravy so they can soak up that good gravy.  Don’t worry – they won’t stay in their long enough to get soggy.  Everyone wants the biscuits. 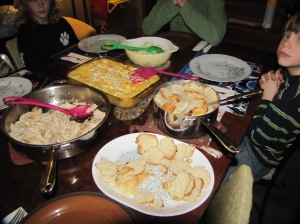 You eat this meal by scooping out a few biscuits onto your plate, putting the fried chicken pieces on top of the biscuits and adding some more gravy on top of that.  The gravy will cover your plate so your vegetables should be able to hold up to the gravy or work with it – like the cauliflower did.  Gram would do asparagus and broccoli too with this meal.

Hope you like it.  Its a big family favorite here – even if the gravy is a wee bit thin.

I am a Mother, a daughter, a sister, a wife, an attorney, a crafter and the granddaughter of an amazing woman - my Polish Grandmother. My Grandmother gave me so much, through her love and her patience, her sayings and her time teaching me how to craft and to give to others, that it seemed fitting to share some of that wisdom, to tell some of her story, and to chat about life and crafts in a way that would be a testament to what she gave me.
View all posts by Shelly R. →
This entry was posted in cooking, cooking with kids, Family, recipes and tagged biscuits and gravy, chicken, cooking with kids, dinners, Family, recipes. Bookmark the permalink.

2 Responses to Food on Friday – Chicken, Biscuits and Gravy