I finally finished the last knitting project on December 23rd – which is good because it was handed to Kaitlyn on December 24th when the family got together to exchange presents. 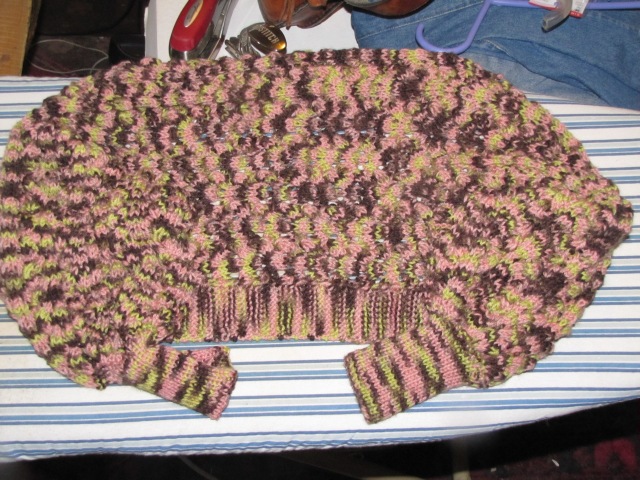 Kinda hurts your eyes, doesn’t it.

The pattern is a free pattern called Shoulderette which can be found here:  http://www.knitting-crochet.com/showom.html  or you can search for Shoulderette on Ravelry and find it.

As for the pattern, it was pretty basic and would be easy to alter.  If you look through some of the other finished projects using this pattern, you will find lots of examples where folks shortened the sleeve, shortened the width or changed the lace pattern to one they preferred.  I, of course, forgot to check the other finished projects before I started so my shrug runs from wrist to wrist. 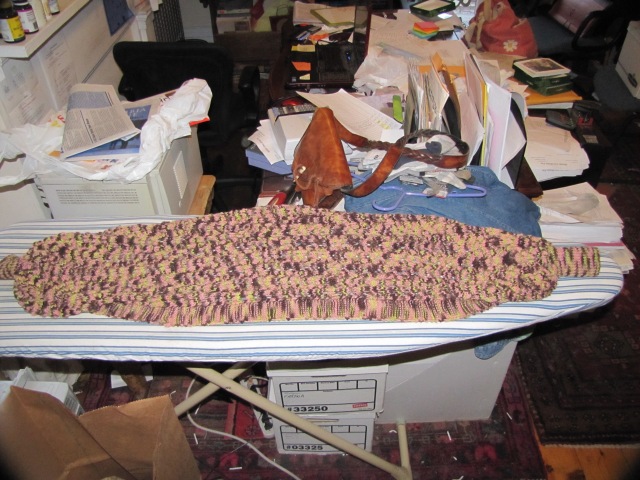 Yes, I keep my ironing board in my office – the life of a self-employed overworked attorney right before Xmas.

Though the pattern does not state it directly, after you knit the entire body of the shrug you seam the four inches of ribbed cuff on each end to wear it. 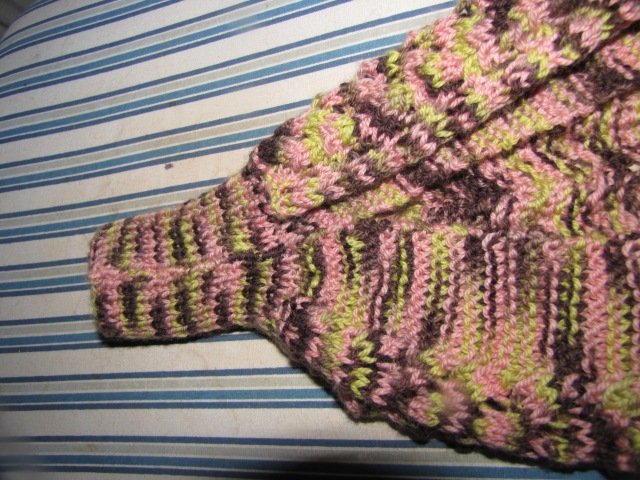 The yarn is Lorna’s Laces Shepherd Sport in the Amy’s First Kitchen colorway.  At first I was really worried about the color combination – it looked like neapolitan ice cream with pistachio substituted for the vanilla.  But then Vash saw me knitting it and said that it looked like camo – which made it much much better.  I was not sure a 13 year old girl would like wearing a shrug that looked like ice cream – but camo is cool.  She might even like it.  The shrug took a little more than 3 skeins of yarn to complete.

While I like to work with varigated yarn, the high contrast and the varigation resulted in a complete loss of the lace pattern when you look at the shrug.

It’s there but you really have to work to see it.

On the whole, it was an easy pattern to make, I just did not really like the finished product.  There was no snugness about it when you put it on.  It did not fall off of the shoulders but it also did not hug the back.  It just hung off the back like an open cardigan would.  I don’t know if Kaitlyn liked it.  It was a busy evening and we did not really talk about it later.  But she had asked for a shrug, I made her a shrug so I figure that was about the best I was going to be able to pull off.

This year did teach me one thing though.  I am not going to set myself to making anything for anyone with any type of time deadlines in mind.  My life just does not lend itself well to too many demands and deadlines.  There are enough of those in my work and with the boys that I don’t want them in the things that are meant to be pleasurable.

I wanted to share a few pics of the boys that I took from Christmas – well – just because they are adorable.

First, the boys were in the church Xmas pageant.  Markus and Vash were Shepherds and Jesse was Joseph.  They all kinda looked the same though.

Jesse did not have a speaking role – which was fine by him. 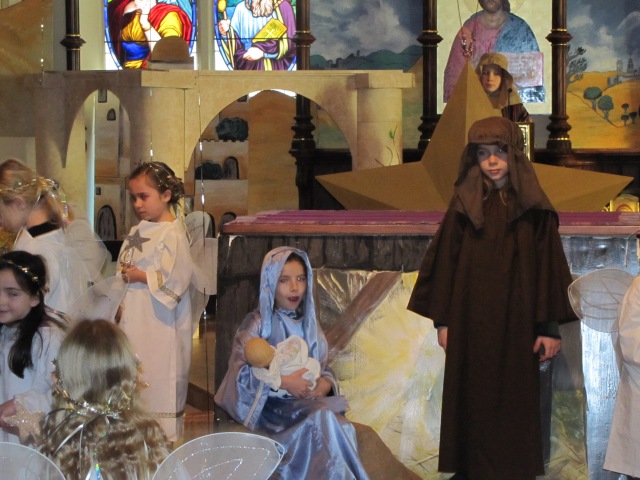 We all went to Cindy’s for Xmas Eve.  I thought the boys looked nice in their flannel shirts.

Those are Vash’s new slippers he begged for at our local shoe shop.  He named the two dogs Floppsy and Moppsy.

Christmas morning was fun and exciting but it is the calm that settles on the house after all the preparation is done, the presents have been opened and breakfast is over that I enjoy.

As I was picking up in the livingroom I noticed some of the things that are part of the holiday that came from Gram.

There is the ornament she made me the year she discovered plastic canvas. . .

and my tree skirt she embroidered. 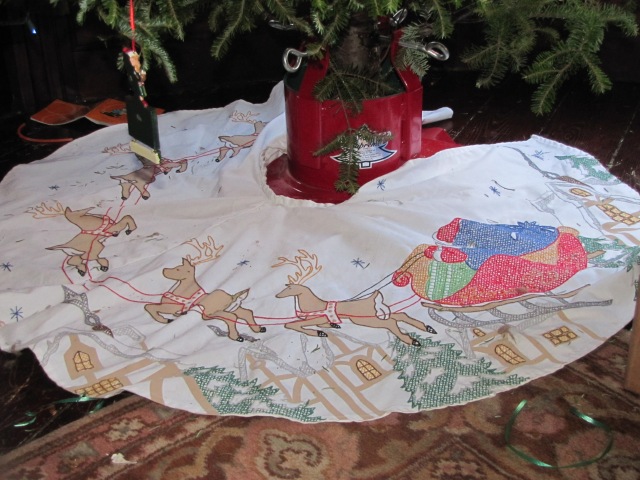 I also have her nativity set – the one I played with for as long as I can remember.  It did not get set up this year because I never got around to really decorating the house.  Too much stuff to be disposed of before I can find shelf space for decorations I guess.  I will make a point of setting it up next year.  The boys are old enough now to enjoy it.

I love having even a part of Gram in my home at the holidays.  I miss her so much at Xmas.  She loved Xmas too.  She loved every holiday where family came together.   After she was gone it felt like the family seemed to shatter and disperse.  She was the glue that held it all together and I miss her.

So that’s all I have for this week.  I am working on knitting the sleeve to Elaine’s sweater now.  I just love knitting with Araucania yarn.  Hopefully I will have something to show you next Monday with that.  Now I want to read the next chapter of my Spinning Wool Beyond the Basics book.  I’m just dying to see how it ends.

Happy Holidays, Blessed Yule and Happy New Year to all.

I am a Mother, a daughter, a sister, a wife, an attorney, a crafter and the granddaughter of an amazing woman - my Polish Grandmother. My Grandmother gave me so much, through her love and her patience, her sayings and her time teaching me how to craft and to give to others, that it seemed fitting to share some of that wisdom, to tell some of her story, and to chat about life and crafts in a way that would be a testament to what she gave me.
View all posts by Shelly R. →
This entry was posted in Family, holidays, Home, knitting, yarn and tagged Family, holidays, knitting, Lorna's Laces yarn, shoulderette, shrug, yarn. Bookmark the permalink.