We are all big fans of mexican food in my house, but we don’t really make it alot.  My family just did not make or eat mexican food when I was growing up so the skills are not familiar to me.  As an adult I would set out the fixins for tacos occasionally, and even venture to put together a pile of nachos, but that was about it.

After making the Black Bean chili, however, I still had some chipotles peppers in adobo sauce left so I decided to see what else I could make with them and came across a recipe for guacamole that used some chopped chipotles.  Hurray!!  I LOVE guacamole.  I also found a recipe for a spinach ricotta enchilada that looked simple, so I called Vash and we started cooking.

Lets start with the ingredients.  For the guacamole we used:

We found this recipe on Bon Appetit.com which is so my go to resource when I have an ingredient and want to find recipes that incorporate it.  I just did a search for “adobo” and six pages of recipes came up.  Can’t beat that.

The ingredients for the enchiladas are:

I found this recipe on www.organicglory.wordpress.com .  I liked the sound of it because I knew my family would like the spinach/cheese filling and I did not have to worry about the spicing – using the prepared enchilada sauce did it for me.  I will say that in the future I will find a good recipe for a mole sauce because the canned sauce really did not do it for me – but it was our first foray into enchiladas so we played it safe.  We doubled their recipe as I did not think it would have made enough to feed the entire family otherwise.

So here is our Vash with the ingredients (minus the cheese which we forgot to grab from the frig – sigh). 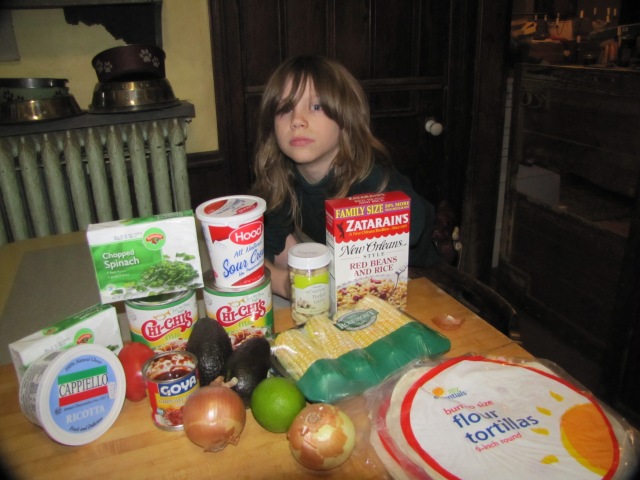 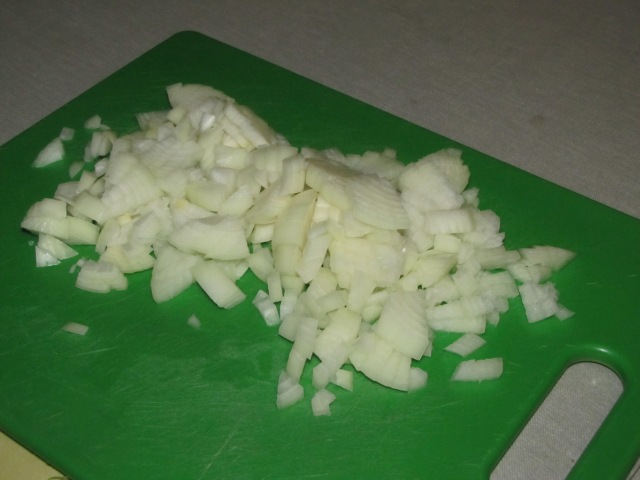 while Vash chopped the garlic. 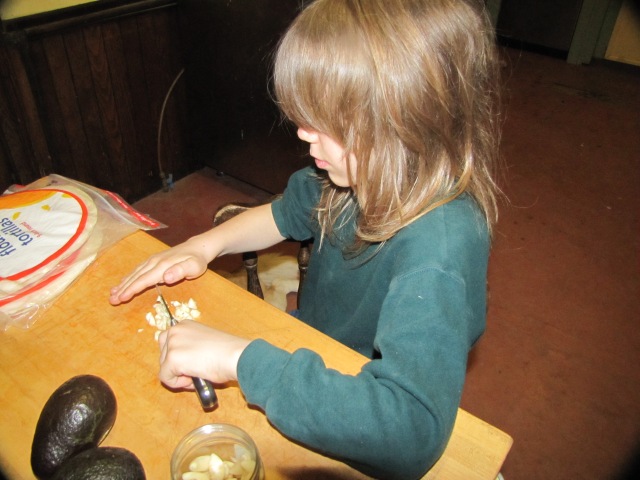 Note fingers away from the blade.  Good going Vash.

Then I started sauteeing the onions and garlic until they were soft and translucent . . . 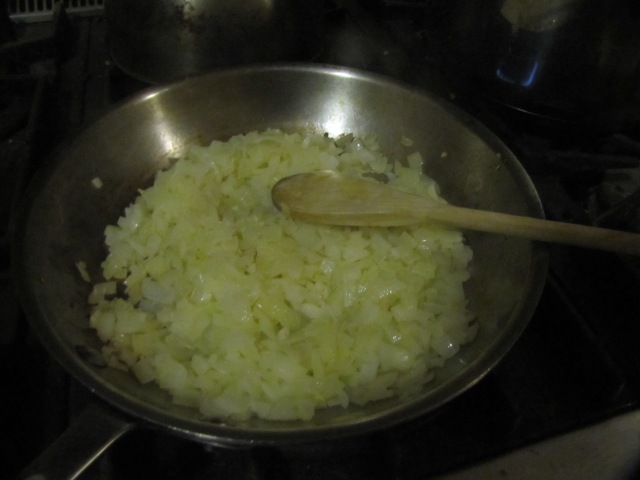 while Vash squeezed the water out of the spinach – doing it over a bowl to catch the pieces of spinach that fell off while he squeezed. 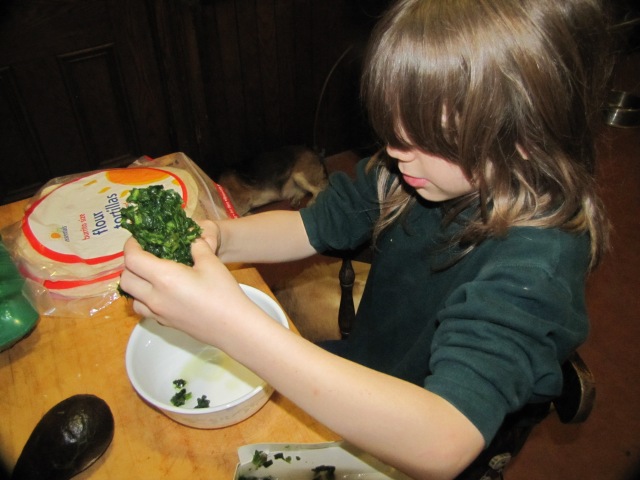 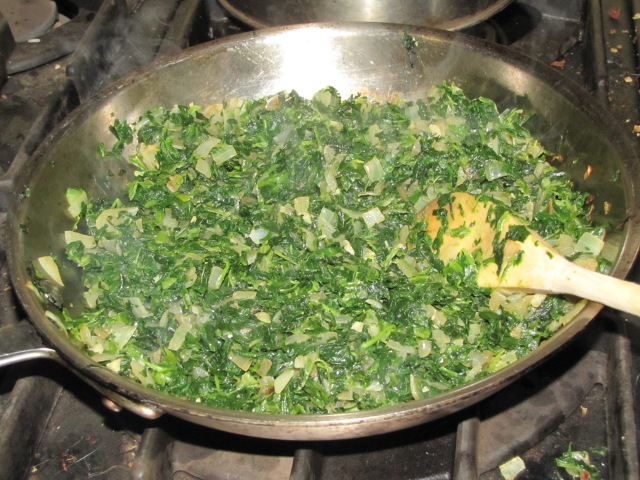 Here is Vash looking very stylish while cooking wearing the belt pouch he made with Chip. 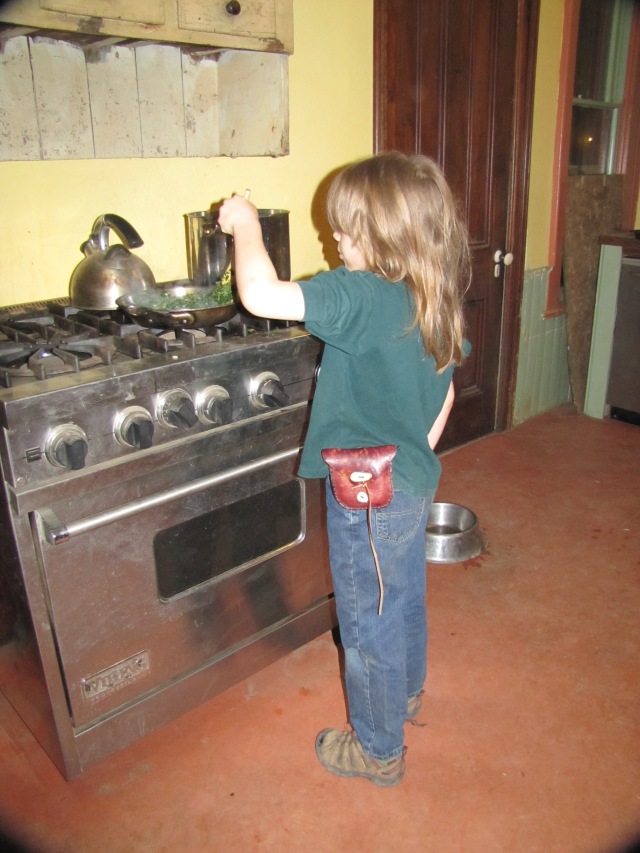 Oh my – I need to clean that stove.  Too much cooking and not enough looking obviously!!  We are in the midst (again) of revamping the kitchen.  I walked into the kitchen one day and my cabinet/workspace next to my stove was gone and the oven moved with an unfinished cabinet set above it and my work table in the center of the floor and I just look at Chip with the unspoken “What the heck did you do?” look on my face as he happily said “Look what I did!”.  We will see what results.  In the meantime, dinner has to be made.

Next Vash mixed the ricotta and the sour cream together . . . 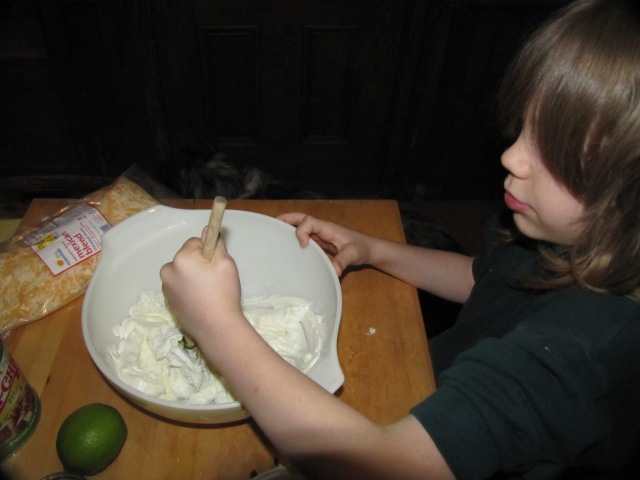 and then he added the sauteed vegys . . . 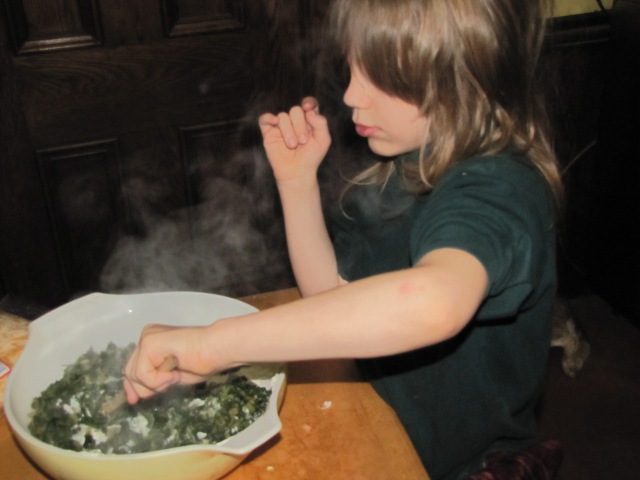 and about 2 cups of the shredded cheese. 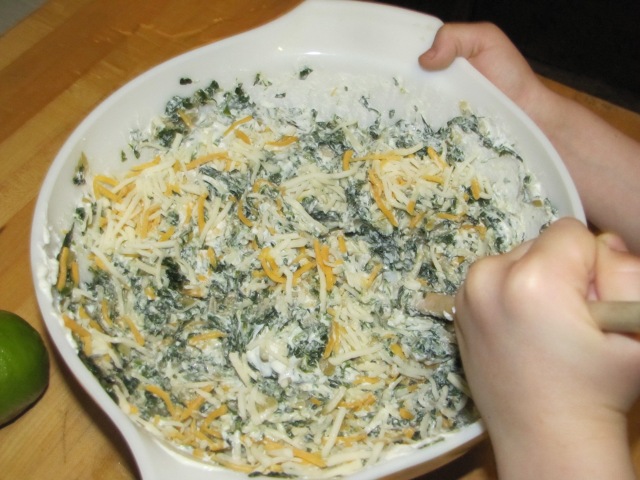 We poured about 1/3 of a can of enchilada sauce into the bottom of each of two 13x9x2 glass baking dishes to cover the bottom. 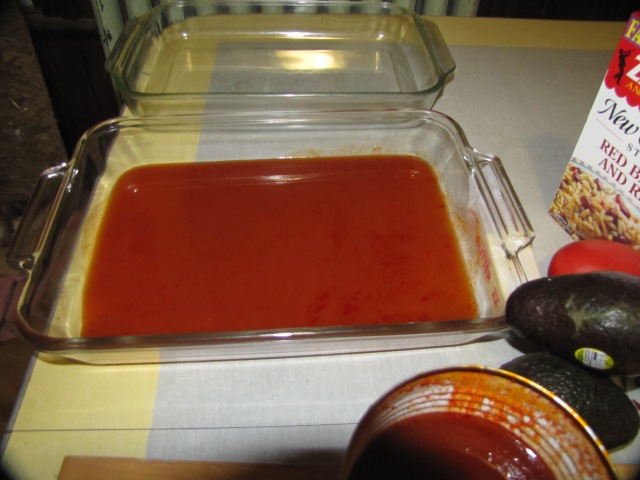 Then Vash started making the enchiladas.  He laid out a tortilla and placed a strip of filling down the center. 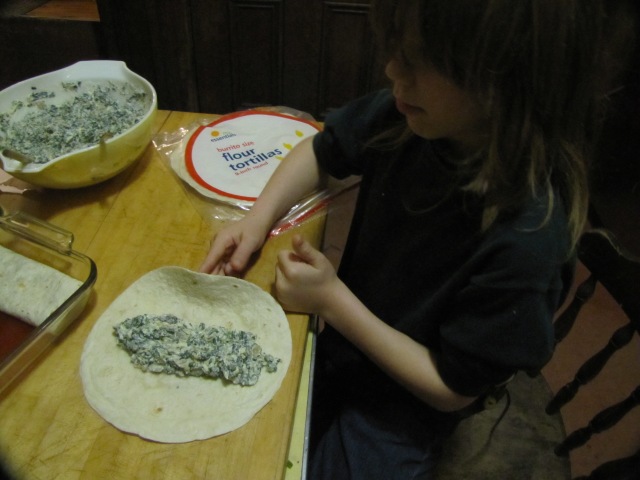 Then he folded one side over the filling . . . 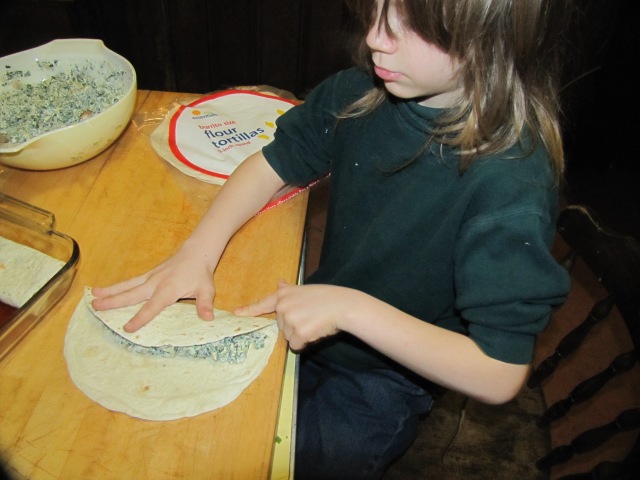 and then the other, forming a packet holding the filling. 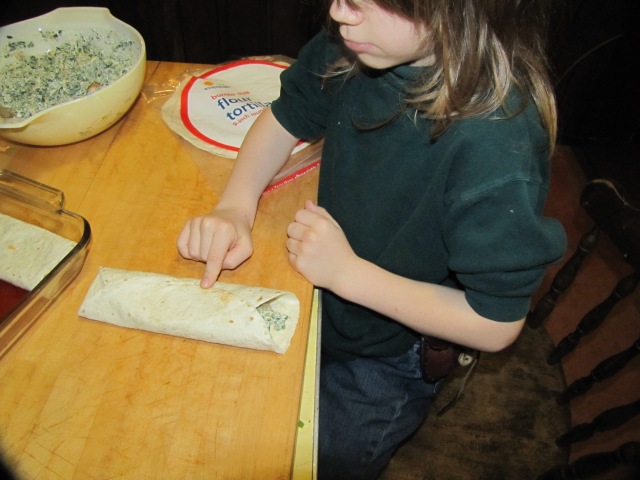 The tortillas were 9 inch tortillas and the baking dish was 9 inches wide so we knew we could fit the enchiladas across the pan.  Next we laid the enchiladas into the pan, with the folded side down . . . 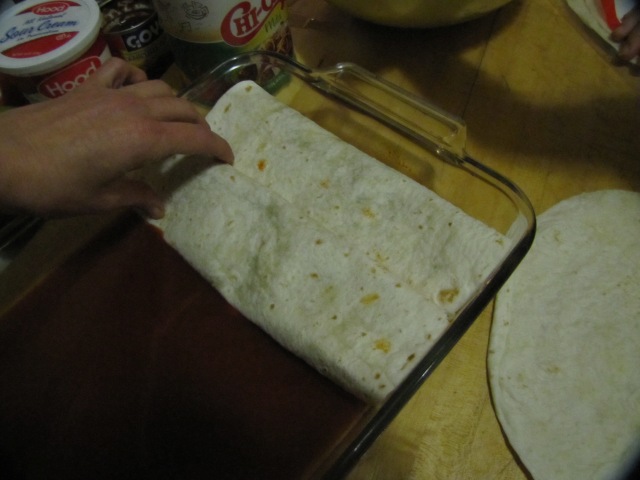 and covered them with the enchilada sauce. 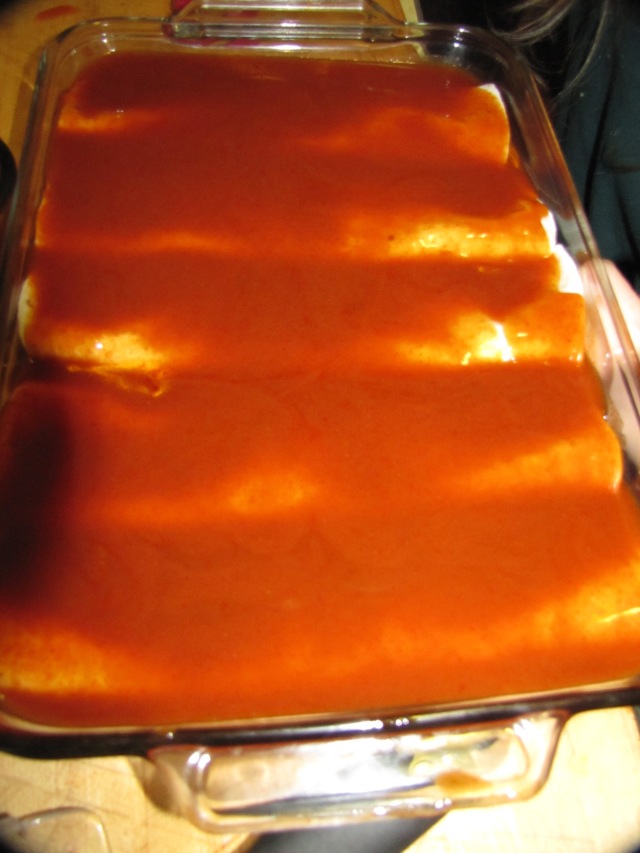 and then the remainder of the shredded cheese.  We baked it at 375 degrees for 20 minutes and when it came out we got this: 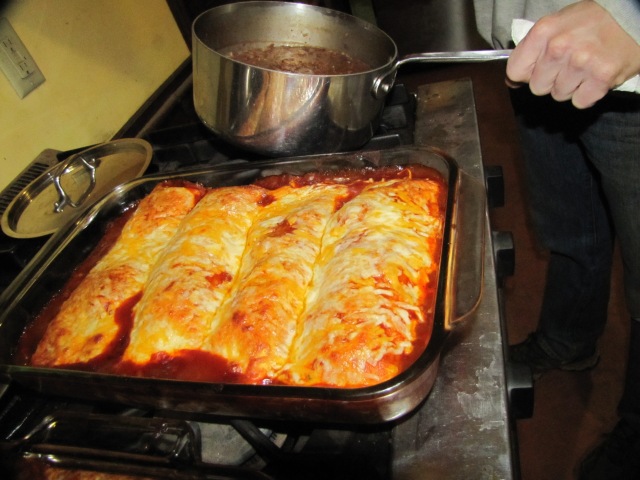 In total, we made 9 enchiladas from this recipe – though they were big enough that a half of an enchilada was sufficient for me for the meal.  Cooked they tasted like a mildly spicy manicotti.  The tortilla lost its bready texture and the elasticity you get in noodles was more noticeable.  Interesting.  I looked at Chip and said “Mexican Manicotti” and he agreed.

While the enchiladas were baking we put together the guacamole.  I cut, pitted and peeled the avocados which Vash then mashed with the juice we squeezed from half of the lime. 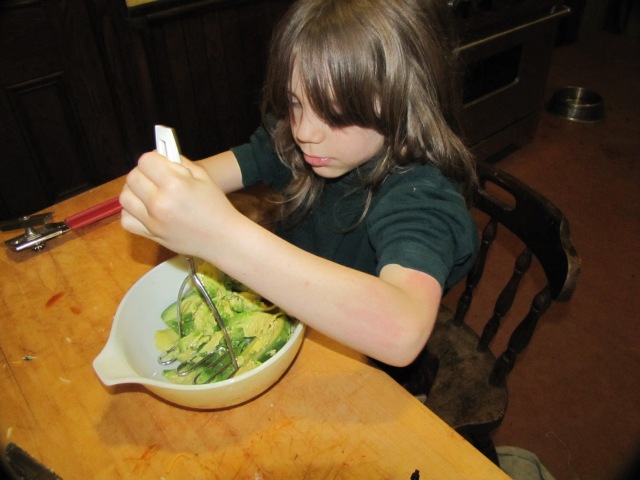 We use a potato masher because it gives you a chunkier guacamole.

I used our cool-o neat-o corn cutter and cut the kernals off of an ear of corn. 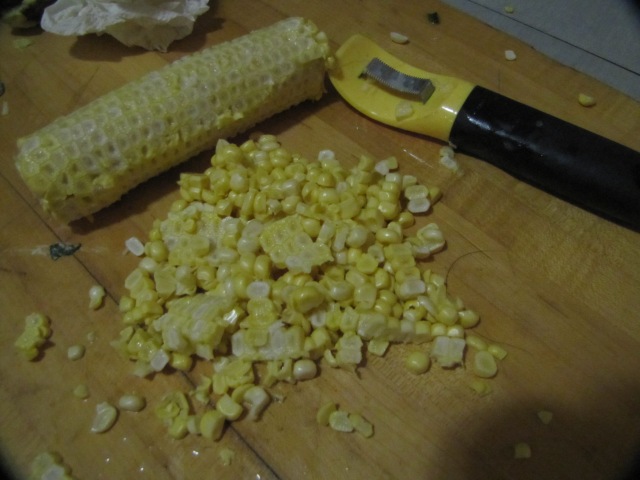 I also seeded and diced the plum tomato (we used one but could have used two) and chopped the two scallions (just the white and light green portions) and Vash mixed them all in together with the avocado. 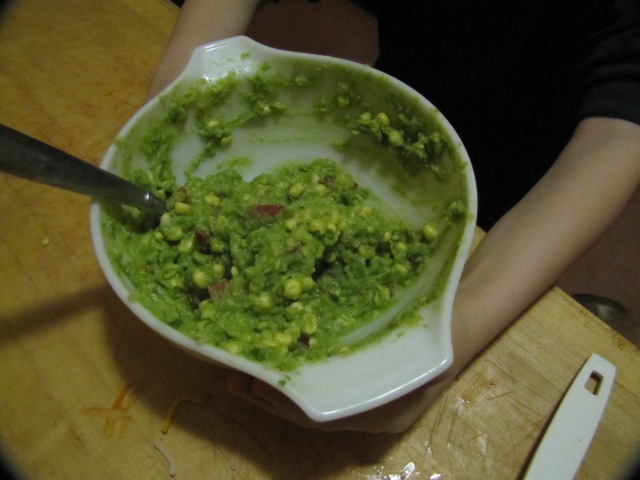 Next Vash mixed the chopped canned chipotle chili (we used half a chili – everyone was a little gun shy after how spicy the black bean chili turned out with two chilis) with the sour cream . . . 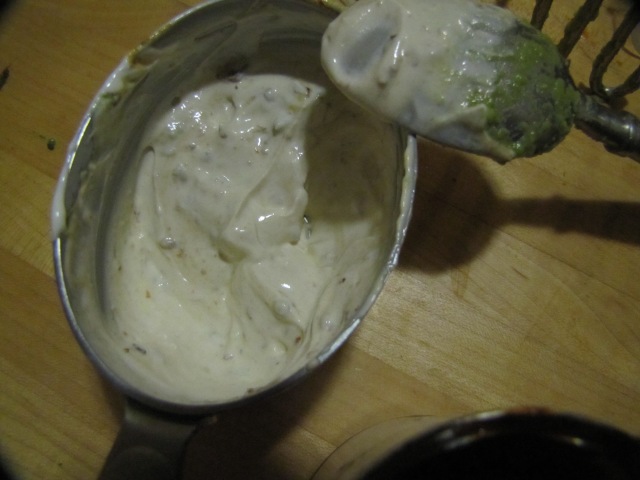 and then he mixed it into the avocado mix . . . 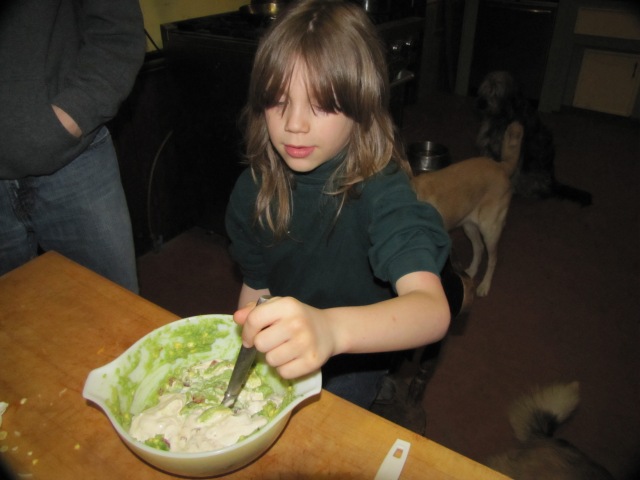 and we had guacamole!! 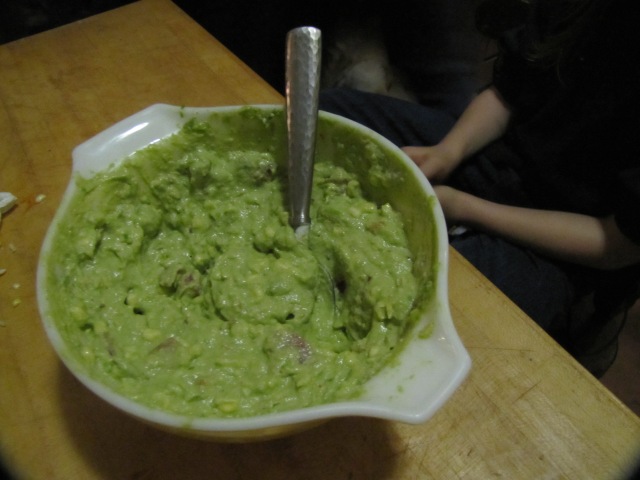 We rounded out the meal with tortilla chips and some red beans and rice. 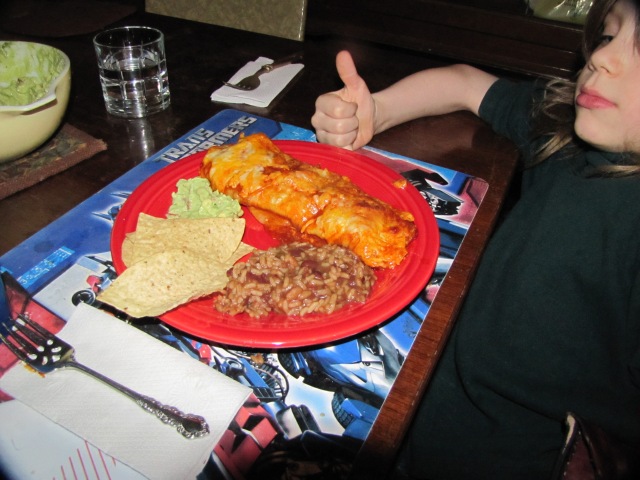 Final comments on the meal.  The guacamole was fairly bland.  I could have gone with the full chipotle as the creaminess of the sour cream and avocado absorbed almost all of the spice.  Now, I like bland in a guacamole because I adore the taste of avocado, and no one in the family complained about the taste, but for a real guacamole it should be spicier.

I would definitely find a recipe to make my own sauce for the enchiladas.  Giving over control of the part of the recipe that is sooooo essential to the overall taste of your meal is just not something I want to do.  With that said, if you have a canned or bottled enchilada sauce that you love, then it certainly makes this recipe move much quicker and makes it more practical for a weeknight dinner.  I did not like the spicing in this sauce so it took alot of the love away from the overall meal.

Sorry to any of you who checked for the blog over the last two days.  There was a fire across the river from us on Wednesday that burned the fibers that carry our cable/internet service to us and we did not get our internet back until late in the day.  As my post for Wednesday was just about mordanting – which I had covered some in prior posts – I just let it go.  As for yesterday’s Hawk Studio blog, Chip has been feeling under the weather all week so I gave him the week off. His head is still pretty foggy and I don’t think he even knew it was Thursday.  We have had the boys home all week from school too which has changed everyone’s routines.

I hope you have a great weekend.  We actually received a small layer of snow overnight (first of the month!) which is melting now under the rain – but it was nice to see the white coating on the trees when we got up this morning.  Wishing you lovely sightings of nature in your day too.

I am a Mother, a daughter, a sister, a wife, an attorney, a crafter and the granddaughter of an amazing woman - my Polish Grandmother. My Grandmother gave me so much, through her love and her patience, her sayings and her time teaching me how to craft and to give to others, that it seemed fitting to share some of that wisdom, to tell some of her story, and to chat about life and crafts in a way that would be a testament to what she gave me.
View all posts by Shelly R. →
This entry was posted in cooking, cooking with kids, recipes, Uncategorized and tagged Bon Appetit magazine, cooking, cooking with kids, Enchiladas, Guacamole, mexican food, recipes, Spinach Ricotta Enchiladas. Bookmark the permalink.

12 Responses to Food on Fridays – Guacamole and Mexican Manicotti (Enchiladas)