Christopher’s favorite cake is Red Velvet Cake so of course the plan for his graduation was to make him one.  Unfortunately Chris was fighting off a rough cough/cold thing last week so he asked me to hold off on the cake because he wasn’t sure he would be well enough to enjoy it.  Well, we had to have something special for the day, so I decided to make cupcakes instead.  That way he could have a little something that day and be able to save the rest for later in the week when he felt better.

The recipe we used I found on the Food Network recipe site and you can find it here: http://www.foodnetwork.com/recipes/paula-deen/red-velvet-cupcakes-with-cream-cheese-frosting-recipe/index.html

I still had some buttermilk in the frig that I wanted to use up and this recipe used it.  I will tell you up front that the cupcakes seem to be a little dry but the frosting was so tasty that no one cared.

Markus decided that he wanted to help on this recipe – which upset Jesse a little because he likes to do every recipe, but there really was not enough to do on this one for more than one kid helper, so Markus had this one on his own, with a little help from me.

So, lets start with the ingredients you will need.  For the cupcakes you need the following:

For the frosting you need the following:

First we took our dry ingredients . . . 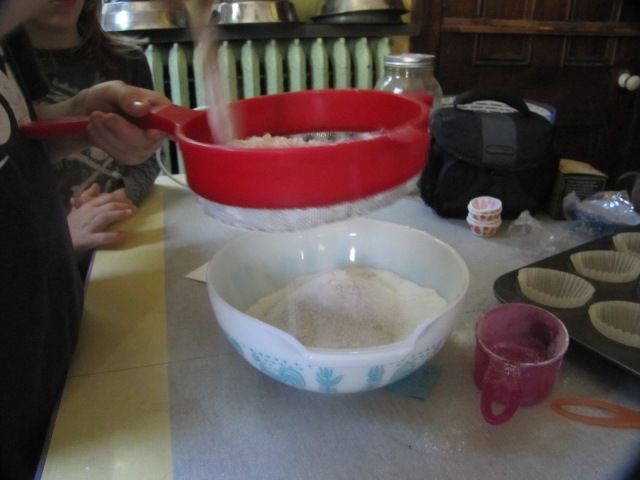 Then we put the wet ingredients into the batter bowl . . .

which Markus beat with the hand-mixer at a low speed until it was well blended and smooth.

mixing until we had a smooth cake batter – which obviously has alot of red food coloring. 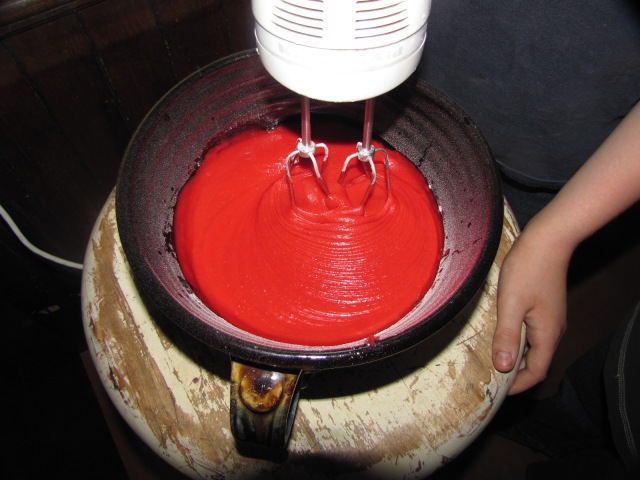 We filled our parchment paper muffin cups about 2/3rds full . . . 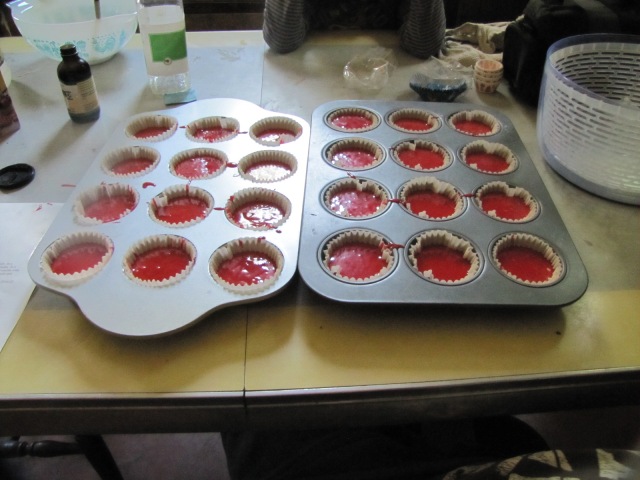 and into the oven they went at 350 degrees for 20 minutes.  While they were cooking, Markus and I made the cream cheese frosting.

This was super simple.  We put the butter, cream cheese and vanilla in the bowl . . . 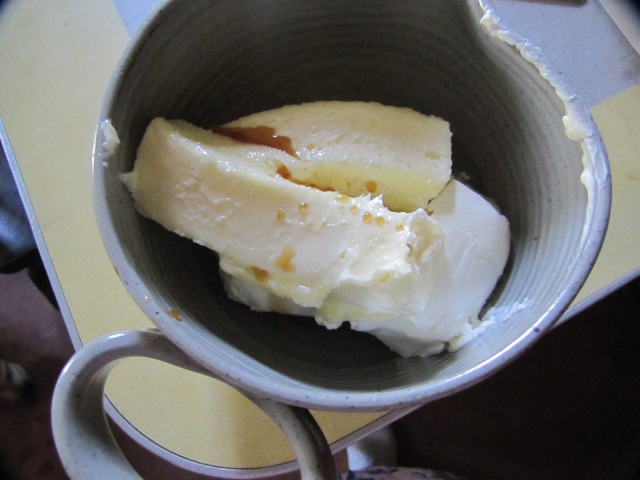 and Markus got back to work with the hand mixer.

In the meantime, I sifted the powdered sugar through the strainer. 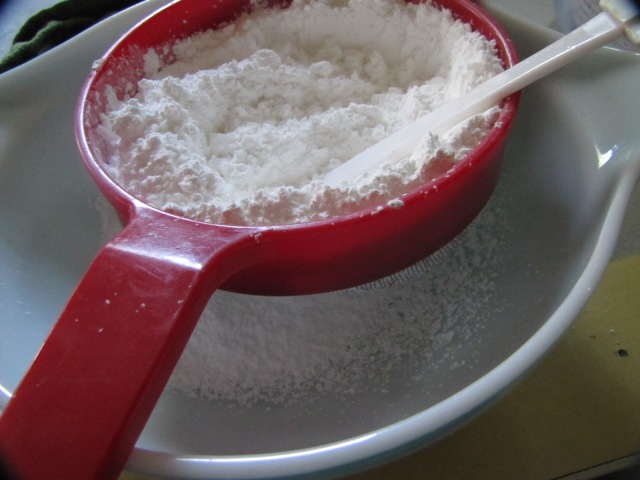 Then we added the sugar to the cream cheese mixture to make the frosting.

The recipe calls for 4 cups of powdered sugar, but it needed more because the resulting frosting was a little too soft at room temperature. That is why I adjusted the ingredients to 4-5 cups of powdered sugar.  Maybe the heat of the day affected it so start with the four cups and be prepared to add more.  We resolved it by putting the frosting in the frig until it hardened up a little bit – about 10 minutes.

Anyway, back to the recipe. 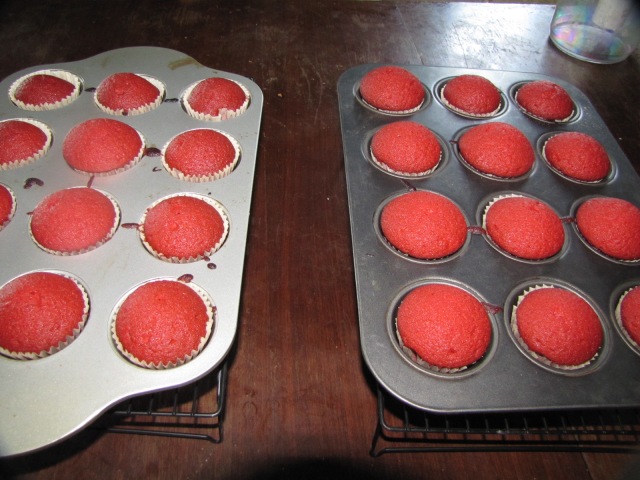 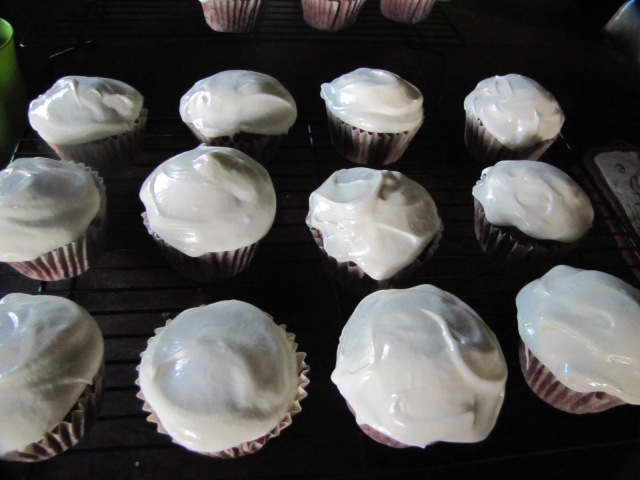 and then I took some strawberries, sliced into each one so that they fanned out (which the boys were sooooooo impressed by) and put them on top of the cupcakes.

You can kind of see that the frosting looks a bit drippy . . . 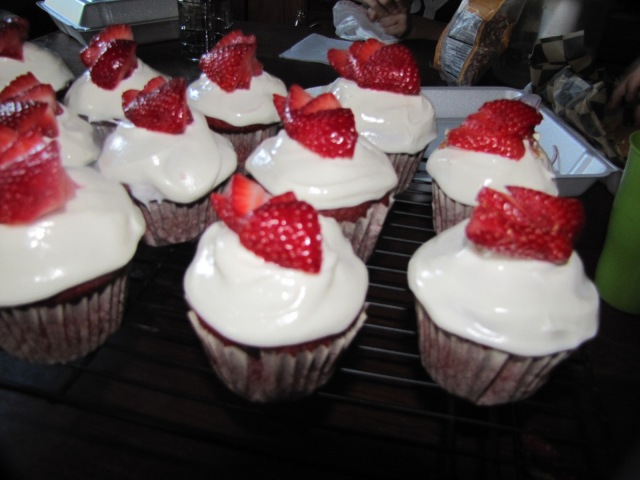 but they still came out well.

Everyone liked them in the end.  When I told Chris that I thought they were a little dry he said that the frosting so made up for it that he didn’t care.  So if nothing else, hang onto this frosting recipe.

In searching, most of the red velvet cake recipes were pretty much the same.  Seems that vinegar is an essential component along with a small amount of chocolate.  I just need to figure out how to give it a more moist texture – I’m thinking that the addition of a pudding mix might do it, but I have to think upon this more.  I don’t really want to add a pre-packaged ingredient.  Hmmmm.  Lots to ponder in my search for a better cake recipe.

Have a great holiday weekend everyone.  I am off to work.  It has been non-stop this past week and I could really use the long weekend – which will include the annual Boy Scout procession in the Memorial Day parade.  Lets hope it doesn’t rain.  🙂

I am a Mother, a daughter, a sister, a wife, an attorney, a crafter and the granddaughter of an amazing woman - my Polish Grandmother. My Grandmother gave me so much, through her love and her patience, her sayings and her time teaching me how to craft and to give to others, that it seemed fitting to share some of that wisdom, to tell some of her story, and to chat about life and crafts in a way that would be a testament to what she gave me.
View all posts by Shelly R. →
This entry was posted in baking, cooking with kids, recipes and tagged baking, cream cheese frosting, cream cheese frosting recipe, cupcakes, dessert, food, paula deen's red velvet cupcakes, red velvet cupcakes. Bookmark the permalink.