Where were their parents!!!

Every year we go to the Holiday Faire which is put on by my oldest son’s grade school because it combines a warm family atmosphere, good food, wonderful crafters and a great gingerbread house auction of houses/structures created by school families and students.  Chip’s sister Cindy and her kids come with us.  Bruce – one of the teachers there, always conducted the gingerbread house auction – somehow getting folks in the audience to put out hundreds of dollars to buy these gingerbread creations in support of the school.  In recent years, presumably due to time constraints, they started “live” auctioning off only the top winning houses in each category – putting the remaining houses up for bid in a silent auction format.  Each of those houses had a sheet of paper next to them where you could write down your bid – including a minimum bid for each.

When Chris went to school there, we made one creation for the auction.  A brownie Stonehenge – complete with a marzipan Druid dancing around a marzipan fire burning on pretzel logs.

When it came time to bid on our Stonehenge, only two people were bidding.  Bruce – the auctioneer – and me.  Bruce and I kept going until I bought back our brownie Stonehenge for $50.  We were so proud of it and this way we got to keep it and support the school.

This year, we went to the Faire knowing that we were not going to be buying any gingerbread houses.  Heck, we were not even going to go to the auction, but Cindy and I love to look each year and see what they made, so in we went – 20 minutes before the close of the silent auction portion of the event.

We were shocked to see so many WONDERFUL creations with no bids on them.  How could that happen?  Where were their parents and grandparents and aunts and uncles?  How could no one be bidding on these creations?  We were doomed.  We ran to the front desk, got a number and started speed bidding.

Cindy and her kids ran around putting bids on the houses which reflected the littlest hands working on their own and were the essence of childhood folk art.  Hers were little toadstools, and a house melting into a tar pit and a church and a little house.  I went for the more outrageous (at least to me) snubs of the Faire.  Chip picked the first one – a delicate teepee made of folded warm cookie dough wrapped around gingerbread stakes.  No one had bid on this.  We paid $20.00 for it.

Then Vash picked one – the only one that we bought that had any bids on it – but they were minimal.  He picked the pinata plane that crashed in a vegetable field.

The boys have already been eating candy off of these so you are not seeing them in their full glory (not that any of them had permission to do that). 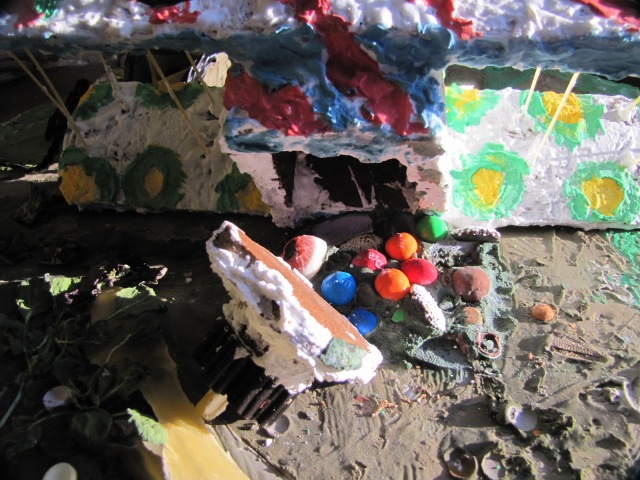 The plane had licorice wires which burst

and it obviously lost its landing gear.

It just took down that tree.

$40.  And that is the most expensive one we bought!

Then Jesse picked his – a Christmas tree with the presents and marzipan animals sleeping around it. 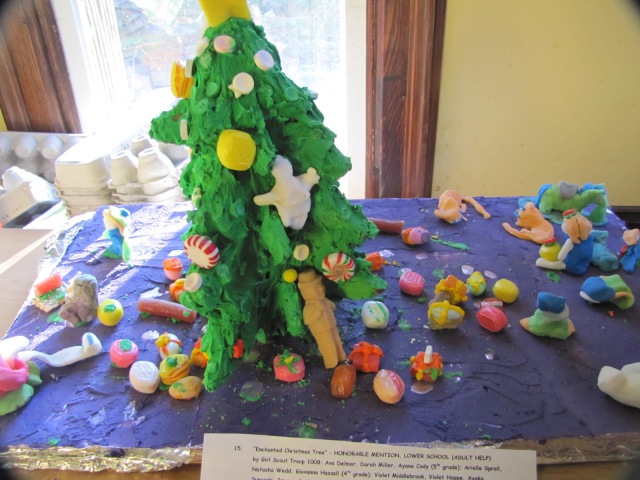 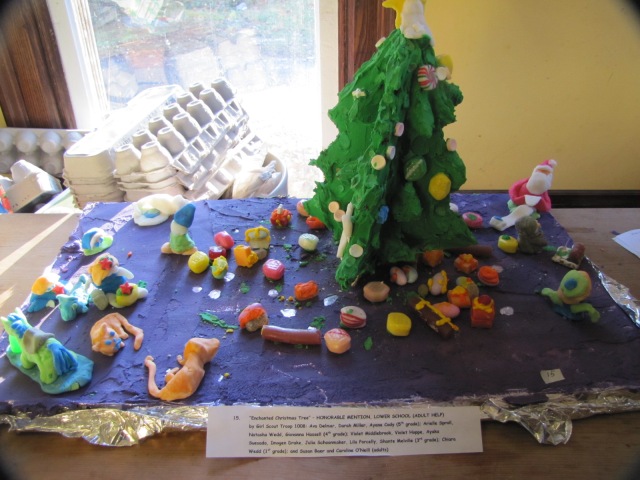 Now I know we sound cheap – we put down the beginning bids on 3 of these – but our hope was that we would get the bidding started and that folks would walk in – having waited to make sure that they got their creations – and bid higher at the last minute to get it.  No one did.  So we gave them all a home.

Markus’s pick was my favorite.  I LOVED this creation and the time and creativity that went into it.  It is the gingerbread baseball stadium of the NY Elves.

There are marzipan players in the field

and on the benches 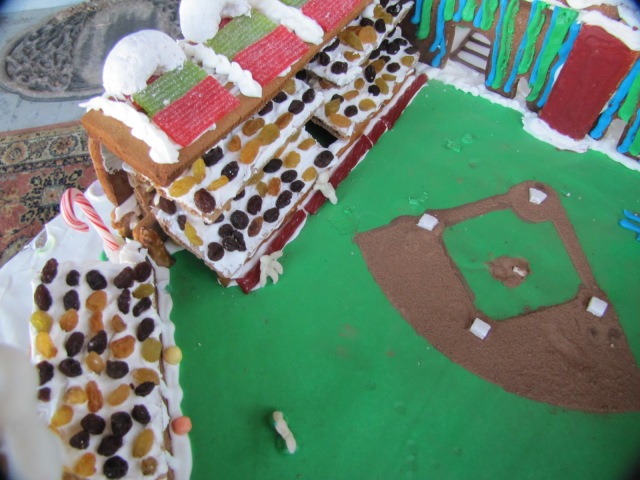 Complete with the foul poles and the scoreboard – this was just an amazing creation.

Don’t you just love the raisin people?  I did.

At the end of the silent auction, Cindy and I paid our money and all eight of us walked out in a line, each carrying a gingerbread house/creation to our cars.  We were not intending to buy any, but we could not let all that work go unappreciated.  How very very sad that would have been.  As it was, there were two that I heard them say had no bids when we left.  One was titled Teleporting Bears – made by the same small artist who made the house melting into the tar pit that Cindy got.  I felt bad.  I thought it was worth bidding on just for the name – but no one else thought that.  I hope they put it in the live auction.

So this is my rant for the day.  Parents!!  Make sure your kid’s work and efforts are acknowledged and appreciated and bought – before my kids eat all their hard work!!

Let me end with the promised Piggy Mittens. 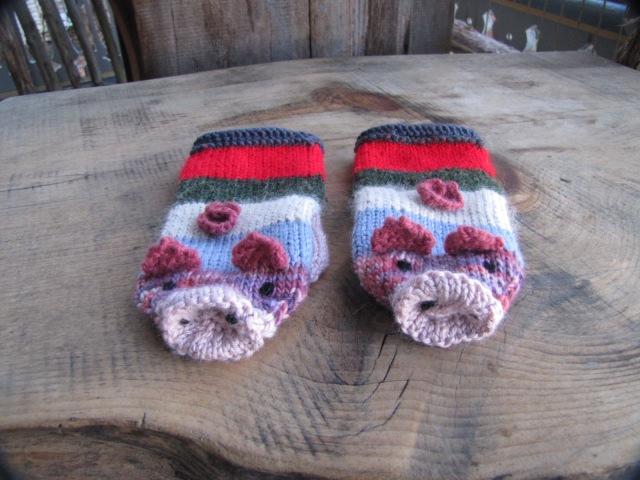 The pattern was designed by SpillyJane.  I made these for our 7 year old niece for Xmas.  I think she will like them.  They fit Vash – who is 8 – so I think they will fit her just fine.

Again, the pattern for this can be found in Ravelry – just search for Piggy Mittens  – and it is a free pattern.

That’s all for today.  I am still working on this Star Wars Hat for Chris that I will post about after it is finished.  The sun keeps peeking out so I might even get some pics of the other new hats I made.  If so, I will post them soon.  Have a Happy Wednesday

I am a Mother, a daughter, a sister, a wife, an attorney, a crafter and the granddaughter of an amazing woman - my Polish Grandmother. My Grandmother gave me so much, through her love and her patience, her sayings and her time teaching me how to craft and to give to others, that it seemed fitting to share some of that wisdom, to tell some of her story, and to chat about life and crafts in a way that would be a testament to what she gave me.
View all posts by Shelly R. →
This entry was posted in knitting, Uncategorized and tagged gingerbread, gingerbread baseball stadium, gingerbread christmas tree, gingerbread creations, gingerbread plane, gingerbread teepee, knitting, mittens, mittens for children, piggy mittens, scrap yarn projects. Bookmark the permalink.

9 Responses to Gingerbread and Piggy Mitts!!