Yes, there is a hat making frenzy going on around here.

Today I have not one, not two, but three hats to show you.  Don’t worry, we are getting near the end of this (though I am thinking that, if I have enough black yarn left after the Star Wars hat is finished, I might make a Toothless hat for Vash – he would LOVE it).

You might remember that last year I made a really cool scarf for my sister-in-law Cindy, using the Cascade Eco-Duo yarn.  Here’s a pic from last year.

This year I made the Star Crossed Slouchy hat by Natalie Larsen to go with it.  Again, this is a free pattern on Ravelry.  I made one like this for me in the cream/beige colorway of this same yarn this year and liked it, so I made it for Cindy too. 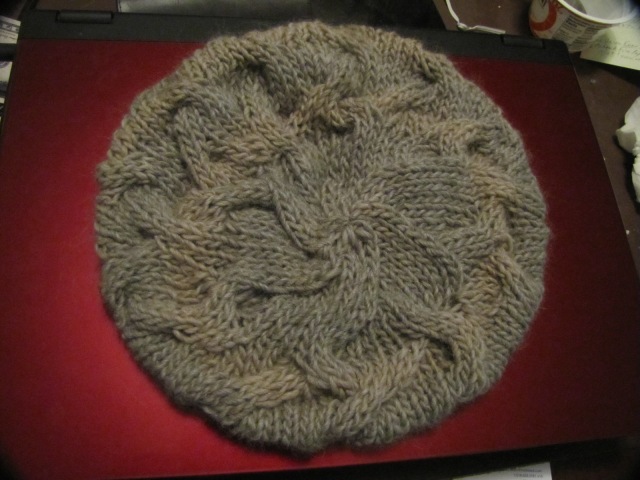 However, the hat fits really loosely using this pattern and yarn, so I went down a needle size – from a 10 to a 9, for the beginning ribbing in this hat to get a tighter fit.  It felt snugger than mine so I think it worked.  You can see the subtle striping in this yarn in the hat as it moves between grey and beige.

Then I made the Rylands Cable Hat designed by Patricia Martin (another free pattern on Ravelry) for my other sister-in-law, using a dk weight sock yarn I bought from Little Knits a year or so ago – the Regia Design Line, Kaffe Fassett, in Landscape Twilight – and it came out like this. 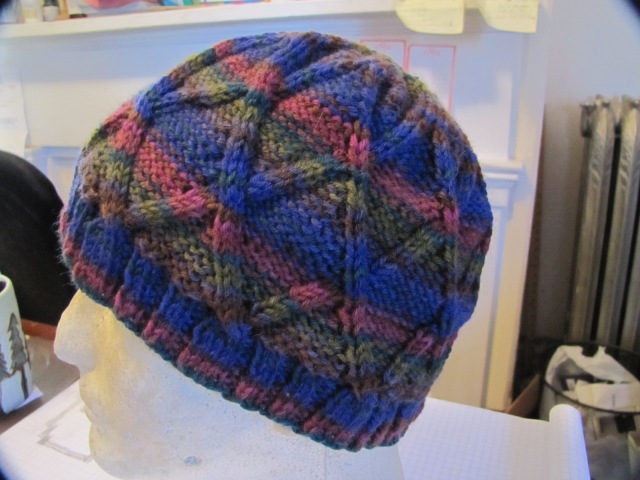 I really like this hat.  The yarn is not soft or springy like I would like a sock yarn to be, but the colors are lovely and the cable design is not lost in the striping.

Finally, here is the Irish Hiking Hat designed by Jenny Flame – and yes, it is another free pattern on Ravelry. 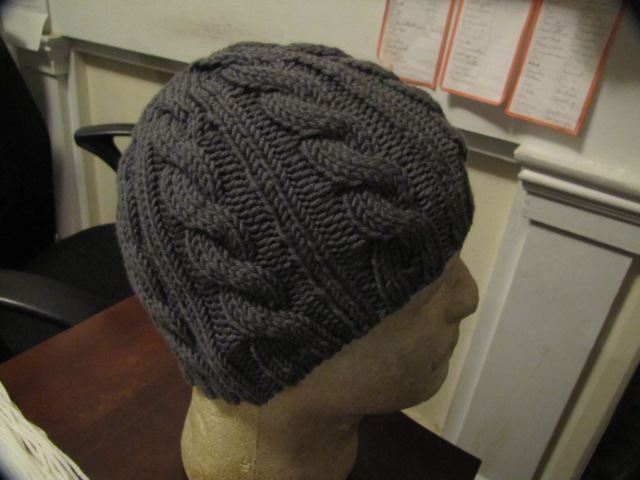 It is not that I won’t buy patterns – I do buy patterns, and books of patterns and magazines of patterns – but I also appreciate that so many designers are willing to share their designs with other knitters and so many of them are really good patterns that I want to make all of them.  Sigh.  There just are not enough hours in the day to do everything I would like to do in a day.  But back to the hats.

The Irish Hiking hat was knit in the Berroco Pure Merino that I originally purchased to make Chip a sweater like the one I made for Chris – my only UGH project in my list of projects.  The yarn knits up nicely and it shows the cable work well.  I just hope it holds up over time.  If not, I know how to reblock it for my brother-in-law.

So that’s all for this installment of hats.  Next post should have the completed fish hat and the Star Wars hat to show you.  Woo Hoo!!  Then I get to start thinking about Toothless . . . .

Here’s hoping all your holiday projects are already finished.

I am a Mother, a daughter, a sister, a wife, an attorney, a crafter and the granddaughter of an amazing woman - my Polish Grandmother. My Grandmother gave me so much, through her love and her patience, her sayings and her time teaching me how to craft and to give to others, that it seemed fitting to share some of that wisdom, to tell some of her story, and to chat about life and crafts in a way that would be a testament to what she gave me.
View all posts by Shelly R. →
This entry was posted in knitting, yarn and tagged hand knit hats, hats, irish hiking hat, knitting, Ravelry free patterns, Rylands hat, star crossed slouchy hat. Bookmark the permalink.